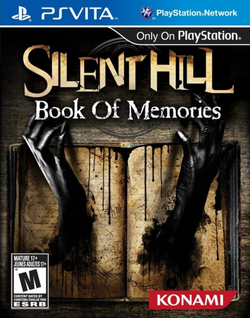 The primary focus of the gameplay is on dungeon-crawling and cooperative multiplayer action, rather than the survival horror elements that the series is known for.

Note: Silent Hill: Book of Memories is set in the year 2010.

文件:Book.png
The Book of Memories.

The protagonist receives a strange book on their birthday from an unknown sender from Silent Hill, Maine. Howard Blackwood, the local mailman, assures the player that the book was meant for them before he departs. The protagonist opens the book and finds that all of their memories are written in it, including all of their experiences and their entire life story. Curious, the protagonist decides to change some memories before falling asleep.

In-game clues and notes suggest that the Book of Memories was created by the Order with the purpose of bringing their God's will to Earth via its writings. An alchemical journal page details three elements considered to be the base of all things. "Light: borne by the Heavens; Blood: borne by this world; and Steel: borne by mankind, and the most powerful". The rest (Fire, Water, Earth and Wood) are considered lesser elements.

The dungeons and their respective characters are as follows:

In each zone you collect multiple notes - each set of zones (Fire, Wood, etc.) has ten of them: one introductory note, three challenge notes, five karma notes (Blood/Light) and one final note, which you get after defeating the zone's guardian. Karma notes are affected by whether you complete the challenges for the zone or not. If you fulfill the requirements of a certain challenge certain karma notes will become Light, if not - they will be of Blood alignment. After you collected all the notes in the zones, there is no need to recollect them again to change their alignment. Simply finish that zones and do or do not the challenges for that set of zones.

You complete the storyline and get your ending after the battle with the Steel Guardian in Zone 21. There are six zones with six final notes prior to that: Fire, Wood, Light, Water, Earth and Blood. The ending you get depends on the ratio of the final notes (Blood/Light) you have before entering the final battle and thus how you get 5 normal endings of the game.

At the start of the game, the player must select a charm, which is a permanent gameplay boost.

The player is given a template for their own character which they can customize to a limited degree. The first aspect of character creation is the class system of which there are five to choose from: jock, bookworm, rocker, goth and preppy. Each class gives a slight boost to certain artifact slot stats.

The player can choose their character's gender, face, hairstyle, hair color, outfit, skin tone and accessories. Accessories are purchased from Howard's Shop and range from traditional fare such as glasses to fan-service items such as Robbie masks, Princess Heart earmuffs and a Pyramid Head helmet.

If the player is unsatisfied with their character, they can re-customize using an Identity Stone.

Players can also equip "artifacts", which are trinkets/talismans that boost RPG-esque stats, such as strength or endurance. There are 64 artifacts in total. These items are modeled around objects that have appeared in previous titles, such as the Channeling Stone from Silent Hill. It is important the player places artifacts in their correct slot; for example, the Jeweled Coronet of Conquest gives +5 INT, but when put in the INT slot, it gives an augmented +6 INT.

文件:BOM5Game.jpg
The player exploring a zone.

The game is puzzle-based, taking place in isometric auto-generated zones, where the player(s) must complete challenges (essentially single-room enemy gauntlets) in order to collect puzzle pieces which are used in conjunction with clues to solve a puzzle located at the end of each zone. Many doors in zones are locked and require keys found throughout the zone to unlock them. Once the player has navigated through three zones, they are then faced with a Guardian boss battle. After Zone 21, the zones become randomized and there are approximately 500 zones in total.

文件:Valtiel.png
The player interacting with Valtiel.

There are also various sidequests made available to the player, such as completing zone-wide missions, locating notes and TV broadcasts, hunting down particular creatures, and collecting Memory Residue. Valtiel serves the role of quest-giver and rewards the player upon the completion of a quest with a rare weapon or artifact. All of the quests, puzzles, and dungeons are randomly generated.

Each zone has a library with a save point, as well as Howard's Shop to purchase items.

Every player also has a backpack in the bottom-right corner which has upgradable slots. The backpack stores health kits, tool kits to restore weapon durability, weapons, and ammo.

While progressing through zones, the player can find and equip a maximum of any two weapons. All weapons have a durability level (listed by an icon which changes from green to red) and/or ammo count depending on whether the weapon is ranged or melee. Durability can be restored using tool kits. Some of the weapons available to the player are from previous titles, including the Hyper Spray, Great Knife and the Sword of Obedience.

There is a large focus on combat in Book of Memories. If the player attacks again at the exact moment their previous strike lands, they can combo. After 5 combos, the player can press the X button to perform an execution and a receive large Karma.

Monsters are separated into three categories: "Blood", "Light" and "Steel". Killing enemies that belong to either the Blood or Light affinity will spill pools of their opposing element. The messier the kill, the more that is spilled. These pools are then collected and measured in conjunction with a new gameplay element known as the "Karma Meter" in the top right.

This meter controls what powers are unlocked and usable at a given time. If the player is more inclined towards Blood (killing Light creatures), they will unlock destructive abilities (Typical DPS) while Light (killing Blood creatures) unlocks powers focused on healing and protection. The Steel category is composed of creatures with more power than the other two categories and that do not affect the Karma Meter when killed.

There are also six Power Moves, when can be purchased in Howard's Shop. Power Move Gems are blue stones under the health bar, allowing the player to perform a super move. Hold R and:

The game features multiplayer for up to 4 players. Co-op is not drop in/out, but hosted sessions only. If these sessions end, players are free to continue their experience in single player mode from where they left off.

Players can communicate with each other using pre-recorded classic specific shout-outs (hold L and up on the d-pad) or by using the built-in voice chat.

On March 18th, 2013, a 339mb downloadable content patch was released that contained multiple new content. [1][2] To install it, the player must tap the yellow circle icon on the game's menu screen.

The game has received mixed reviews on Metacritic. The game currently holds 58 out of 100 based on critic reviews. [3]

Hardcore Gamer Mag gave it an 80/100, saying: "While survival horror purists may balk at the concept, anyone a fan of top-down action/RPGs, deep gameplay and a interesting story will find not only the most addicting multiplayer Vita game to date, but the best Silent Hill in recent memory." Greg Miller of IGN gave the game a score of 6.0 and said: "Flawed, but fun", he added: "Silent Hill: Book of Memories isn't a good game, but it's one I keep coming back and playing. While we were tantalized with the Diablo-like gameplay of Warrior's Lair (a crossplay dungeon crawler) before the PlayStation Vita launched, the game formerly known as Ruin hasn't been seen or heard from in months. Development hell, they call it. Now, Silent Hill is here to fill that void, but it does so without any style or polish". He concluded with: "If you just want dungeons to crawl through and couldn't care less about polished menus and engaging stories, great."[4]

The game was also criticized for some long loading times and lacking any semblance of horror atmosphere. The game isn't considered scary.

Overall, long-time players of Silent Hill have generally rejected the game for deviating from the general themes of the series, though it has garnered its own fans among newcomers.