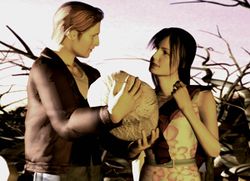 In Silent Hill, Harry meets many people. He forms a bond with Cybil Bennett, a police officer, and they attempt to find his daughter. However, Cybil doesn't seem to understand Harry when he talks about phenomenal things, such as his dreams of the Otherworld and reality.

After exploring Midwich Elementary School, Harry meets Dahlia Gillespie, a priestess of a cult named "the Order", and she often gives clues to help Harry, yet also confuses him in doing so. While exploring the town, Harry often encounters Dahlia's daughter Alessa, although she always disappears before Harry is able to speak to her.

In Alchemilla Hospital, Harry meets a doctor named Michael Kaufmann and a young nurse, Lisa Garland, who grows attached to Harry after he meets her. They have conversations about Silent Hill's past and Harry offers to take her with him, but she declines, stating that she doesn't feel she should leave the hospital.

Harry, Cybil, and Dahlia meet up in the Resort Area to stop Alessa's plan to unleash hell on the town. In order to do this, they need to use the Flauros to stop Alessa before she places the "Mark of Samael" on the lighthouse and Lakeside Amusement Park. Harry arrives at the lighthouse too late, so he heads over to the amusement park to regroup with Cybil, who has been infected by a parasite. Harry has no choice but to defeat her in battle, and Cybil is ultimately killed in the canon ending. Dahlia reveals to Harry that the Mark of Samael is actually a sigil that repels against the cult's god, and Harry realizes he has been deceived. Alessa returning Cheryl by means of a reincarnation containing her soul.

Harry is then transported to Nowhere, where he reunites with Lisa. Lisa transforms into a deranged nurse, and Harry retreats against a wall in fear as she approaches him, yearning for solace. He locks her in a room alone as she cries, though he feels sympathy for her. A middle-aged Harry with Heather.

After escaping Silent Hill, Harry lived an ordinary life in Portland with his new adopted daughter. Harry was unsure about raising the baby, and considered killing, strangling and abandoning her because he suspected the baby was a reincarnation of Alessa, and Alessa was responsible for taking Cheryl away from him. However, Harry decided to forgive Alessa and raise the baby.

The religious organization of Silent Hill, the Order, had planned to abduct the reincarnated Cheryl/Alessa and proceeded to track her down. Five years after the events of the first game, Harry killed a cult member in self-defense. The cult member attempted to kidnap the reincarnated Cheryl/Alessa. Harry was acquitted in court and relocated to another town to hide incognito.

To ensure his adopted daughter's safety, he dyed her hair from brunette to blonde and renamed her from Cheryl to Heather. Afterwards, he eventually settled in the Daisy Villa Apartments with her. Despite feeling confused and frustrated at who Heather could be, Harry was determined to raise her.

Heather runs an errand for her father at the mall and phones her father telling him that she is coming home. Heather's last words to Harry in their conversation are "I love you too, Dad."

When she returns home, Heather discovers her father slumped in a chair, having been brutally murdered by the Missionary under Claudia Wolf's orders. Heather gasps at the sight and sobs uncontrollably, saddened by the sudden loss. Heather looking at her deceased father.

After defeating the Missionary by herself, Douglas Cartland helps Heather move her father's body into his bedroom and covers him with a sheet and lilies. Heather decides to kill Claudia in revenge for her father's death, who is waiting in Silent Hill. Before their car ride to Silent Hill, Douglas gives Heather a postmortem notebook from Harry. The notebook details Harry's experiences from the first Silent Hill game and is a final goodbye to his daughter. Heather wonders if her father would be mad at her decision if he were still alive and promises to return home.

In the chapel, Heather encounters a facsimile of her father's bedroom while traversing the Otherworld church. There, Harry's corpse is missing from the bed, which is stripped of its coverings with scattered lilies on the floor, and a trail of blood leads to the door. If Heather examines the bed, she will state, "This room looks just like Dad's. It's more than just a resemblance. Dad's not sleeping in the bed, though."[2]

After defeating God, Heather mourns over her father's death one last time. Just as she is ready to leave, Heather looks behind her at what is unseen by the player, which may have been Harry's presence. 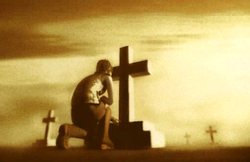 Harry being given a decent burial.

At the end of the game, when Douglas calls Heather by her name, Heather states that she isn't hiding anymore and wants to be called Cheryl, the name her father originally gave her. The game closes on an image of Cheryl putting flowers next to Harry's grave, having given her father the burial she wanted him to have.

In the UFO ending, Heather returns home to find that Harry is not dead and tells him about her hardships. Infuriated, Harry obliterates the town of Silent Hill with the help of aliens. Harry is also found in the UFO endings of both Silent Hill 2 and Silent Hill 3. In Silent Hill 2, he descends from a space ship and asks James Sunderland if he has seen Cheryl; James in turn asks if Harry has seen Mary. James is then zapped by a ray gun and dragged onto the ship.

Harry's voice can be heard at the end of Silent Hill: Origin's Good ending, as can his wife's, when they discover Cheryl (off screen) in a field. 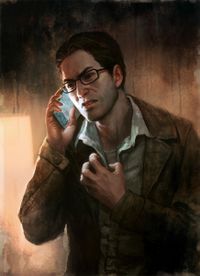 Harry is the protagonist of the re-imagining of the first Silent Hill game, Silent Hill: Shattered Memories, which is in a separate continuity. He is 30 years old and wears glasses in the game.

Harry appears in Silent Hill: Revelation, which serves as both a sequel to the first film, and as an adaptation of Silent Hill 3, portrayed by Sean Bean.

Christopher Da Silva, husband of the first film's protagonist, Rose Da Silva (who replaced Harry Mason's role in the film), uses the alias "Harry Mason" in order to hide himself and his daughter Sharon (who uses the alias "Heather Mason", respectively) from the Order. Harry is kidnapped by the cult, which forces Heather to go to Silent Hill to find him.